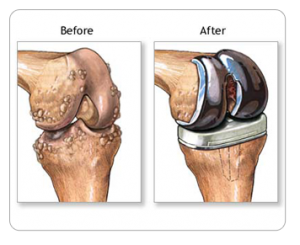 Knee replacement surgery! Something I needed desperately. The joints were shot and it hurt to walk and climb.

I decided to get both of them done at the same time so I only had to recover once. The surgery  took place on April 6th. It was quite a fascinating procedure and it began a two month journey that brought me to an even more dramatic awareness of the awesomeness of God.

I went to an orthopedic specialist 6 years ago complaining of problems with my knees. He has just performed the carpal tunnel release surgery on both my hands and asked if I had any other issues. After an X-ray he said, “Ooooooh! Plastic knees!” indicating he was willing and ready and I was definitely in need of knee replacement. I told him I would get back to him.

On my next visit to my primary care physician, I told him what the ortho doc wanted to do and he told me to wait. He thought I was too young (51). He said, “Keep the knees God gave you as long as you can.” So I decided to follow that advice and moved on with my life. What I moved on with was increasing pain and a gradual decrease in mobility. It became difficult to walk any distance, even go shopping. Climbing stairs was horrible and I became such a couch potato that I started thinking I would never do anything again. All the inactivity caused me to gain even more weight and increased my blood pressure so by the time I got into the winter of 2010, I wanted relief. I made an appointment and a surgery date was set.

I was pretty apprehensive about the situation. How much pain would I have? How long would it last? How long would it take me to walk again? Would there be any real improvement? I wasn’t afraid of surgery or the hospital, I just had these nagging questions.

I also wondered why God didn’t just heal me from the whole thing. I’ve seen some genuine miracles in my 37 plus years of serving Him. I’ve even prayed for some people who got healed (and some who didn’t). So how about me? Is there a miracle for me so I don’t have to go through all that? I wasn’t angry about it, I just wanted something cool to happen to me. I wanted a testimony to share about His power and grace. Some of my knee problems were related to being overweight, but, according to the doc, it was mostly genetics. Without a miracle you can’t do anything about that! Six years was long enough to wait. I was now looking for a medical healing. What I got was a medical healing with God all over it! He was with me.

April 6th started very early. I was at the hospital by 6:15 AM. I was excited and also wondering how I was going to feel around 11:00, after it was all over. The anesthesiologist came in to chat. I told him how on my last surgery (nasal polyp removal a couple years earlier) they had trouble putting a tube down my throat to administer oxygen. I also have sleep apnea which causes my airway to close up sometimes, so I sleep with a machine that pumps air into my nose and keeps it open.  He decided to give me a spinal to numb me from the waist down. I would be awake, but wouldn’t feel anything. He asked it that made me nervous. I told him I watched the Discovery Health channel all the time and was fascinated by surgery. I even watched some knee replacement surgeries on YouTube a couple weeks earlier so I could get an idea of what they were going to do to me. He liked that answer, so I was wheeled into the operating room, slid onto the table and got my spinal. “So that’s what a mom feels like who delivers a baby if she gets one of these,” I mused.

I Knew What They Were Doing to Me

It was cold in there. It felt weird to have my legs numb and be unable to move them. They put up a sheet so I couldn’t see what they were doing, but I heard lots of sounds. Drills, saws, hammers, clamps, doctors and nurses talking and music. It was really interesting. I knew exactly what they were doing based on the sounds because of the YouTube videos I had seen. They did the left leg first. 45 minutes later they were done. Then they started on the right leg. Now I started feeling weird. No pain really, but this weird crampy feeling like my whole leg was being squeezed from top to bottom, like in a vise or a trash compactor. Strange! I told the drug doc I was getting uncomfortable and didn’t think I could do this for a whole hour. He put something in my IV line and the next thing I knew, I was being asked to slide onto the gurney for the ride to the recovery room. It was all over.

Then drug doc asked if I wanted a pain block for my legs to help when the meds wore off. I accepted, not knowing what it would feel like later. I did just have part of my leg bones sawed off and removed so I thought, why not, it might hurt really bad.

They put my legs on top of a triangle shaped pillow to help prevent clotting. I had to stay on that for 2 hours. That caused very sharp pain just under the left knee because my hamstring was all knotted up. I had pampered that leg the last few years because it had always hurt the worst, so I used it the least. Well, that was the longest two hours of my life.That pillow dug into that hamstring and nothing helped relieve the pain. Finally they took me to my room and removed the pillow. It helped a lot to stretch out the leg.

As for surgery pain, it was minimal, even after the pain block wore off. They had me hooked up to a morphine dispenser, but I didn’t use it. I was quite comfortable until the next morning when that hamstring started throbbing again. I hit the morphine once and that did nothing to help. After a few hours I asked for heat to be put on it. Eventually the heat allowed that knot to release and by late evening I was pretty comfortable. I think if I had never had the triangle pillow jammed under my legs I would not have had a problem, but preventing blood clots was more important. Everything else was great and the nurses started making comments about how I was doing unusually well for someone who just had both knees replaced. I told them I had lots of people praying for me. God was not only answering prayers for my recovery, He was also surrounding me with peace and love. It was both a physical and a spiritual experience.

Comments have been disabled due to abuse by spammers. You can make comments or ask questions by email. Go to the contact page.

You can find out more about which cookies we are using or switch them off in settings.

This website uses cookies so that we can provide you with the best user experience possible. Cookie information is stored in your browser and performs functions such as recognising you when you return to our website and helping our team to understand which sections of the website you find most interesting and useful.

Strictly Necessary Cookie should be enabled at all times so that we can save your preferences for cookie settings.

If you disable this cookie, we will not be able to save your preferences. This means that every time you visit this website you will need to enable or disable cookies again.